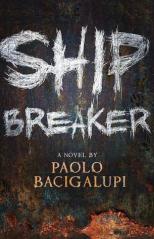 Nailer leads a rough life, stripping rusted out oil tankers of their copper wiring, with the constant threat of injury, starvation, or death hanging over him like a dark cloud. What Nailer needs is a bit of luck. When he finds a luxury yacht, seemingly abandoned by her crew after a city-killing hurricane, it seems he’s found his big payoff. Little does he know that what’s will change his life forever.

Nailer lives in dystopian future that is not too hard to imagine. Earth has been ravaged by her has to occupants, her natural resources all but used up, the ice caps melted and huge swathes of the country are underwater. Nailer lives on the Gulf Coast, scavenging copper wire from old oil tankers. For now he’s perfect for it; his small, light body can wriggle into tight spaces and that allows him to make quota- and thus survive- another day. Nailer has to wonder though, how much longer will his luck hold up? What he needs is some big luck.

After a city-killer hurricane wipes out practically his whole town Nailer isn’t sure if his luck will hold at all. He and his pal Prima decide to go rustle up some of good fortune of their own and scour the coast for salvageable wreckage. As the day wanes on Nailer and Prima stumble across the biggest score they could imagine, a luxury yacht off the coast, seemingly abandoned by capitan and crew. This is considered Big Luck by the superstitious duo and they board the ship ready to strip it of all it’s valuables and cash it all in for a major payoff. What they don’t expect to find is the injured girl in the lower cabins. Now Nailer needs to decide if he’s going to kill her and make a fortune from his find or if he should try and help her get back to her people.

Nailer’s choice puts everyone he cares about in serious danger as he and the rescued, Lucky Girl, sneak off to Orleans II and seek a ship back to safety. They’ve got to negotiate a world of enemies and thieves, to get where they’re going and Nailer’s only hope is that he, and his luck, will hold.

What makes Ship Breaker worth reading is Nailer’s humanity. He’s living in a brutal world, where friends die or become enemies at the drop of a pin; his own father is own of the books biggest villans. Despite all that though Nailer proves himself to be thoughtful and demonstratively appreciative of the value on human life. Namely he weighs his choices and decides that rather than getting rich enough so that he and Pima can stop scavenging ships, he’s going to save this privileged girl he knows little and less about. If any other character in the book, well maybe not Pima’s mom, had found Lucky Girl they would have made quick work of her and cashed in for the big payoff, but Nailer demonstrates a remarkable bit of humanity in the face of the daily horrors he faces as a shipbreaker and this act of selflessness really set him apart from the majority of the characters in the book, leaving the reader to wonder whether morality is something that we’re taught or that we’re born with.

Paolo Bacigalupi is from Colorado Springs, Colorado and achieved a BA from Oberlin College in 1994. He’s an author and journalist, his first novel The Windup Girl was published in 2009 and most recently has published a sequel to Ship Breaker called The Drowned Cities, it is not included in this collection.

Bacigalupi writes mainly adult science fiction. He’s been nominated for Nebula and Victor Hugo Awards several time and his work has been anthologized in several “best of” series, Ship Breaker was nominated for a National Book Award in 2010. He’s written six novels, two of which are YA fiction.

What do you think of the world Bacigalupi has created? Is this a kind of future you can imagine?

Nailer has to make a tough decision when it comes to saving Nita, what would you do in his position?

This is a pretty dark novel, the world that Nailer lives in is not a nice place. Some parents may object to their children being exposed to this kind of post-apocalyptic world, but a collection development policy that clearly states the library’s support for the ALA’s Library Bill of Rights and  every reader’s freedom to read should offer the library some protection from over protective parents. This book is intended for children over the age of 14, those young people should be old enough to discuss with their parents what they should and shouldn’t be reading.

My collection is rather lacking in male leads. I included this book to help fill that gap.

This entry was posted in book and tagged books, post-apocolyptic, YA FIC. Bookmark the permalink.