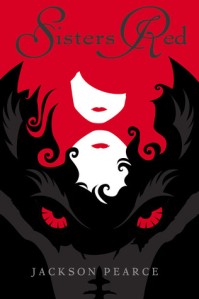 In this Little Red Riding Hood reboot, two sisters struggle with their family’s violent history as they struggle to affirm their individuality. Rosie is the younger sister, innocent and especially attractive to the Fenris, a breed of soulless werewolves. Older sister Scarlett, Lett, is an expert hunter, tracking down and killing the wolves with help from her sister and the neighboring woodsman, Silas. When Silas returns after an extended vacation he begins to urge the sisters to find a life outside of hunting wherewolves, will he be the wedge that drives them apart? Can the sisters survive in a world that doesn’t revolve around Fenris?

Rosie and Scarlett March witnessed the violent death of their grandmother at a young age. Since then they have dedicated their lives to tracking and hunting Fenris, the soulless werewolves that killed their Oma March and permanently disfigured Scarlett. The girls were trained to hunt werewolves by none other than their woodsman neighbor, Pa Reynolds, and his brood. As the children age a close partnership develops between the woodman’s youngest son, Silas, and the girls. Silas trains and hunts with Scarlett, both of them becoming expert hunters, and while Rosie is deadly with knives it is the other two who strive to protect her. That is until Silas decides to leave town and travel across the country, abandoning their mission to protect the innocent from the Fenris so far as Scarlett is concerned. After the woodsman’s son comes back to town things begin to change between the sisters. Scarlett is as driven as ever to protect her sister and destroy the Fenris, but Rosie finds herself drawn to Silas and freedom from a life of hunter and hunted. After the trio moves to Atlanta together to bag their biggest hunt of all, the cracks in the relationship of the sisters begin to widen even more. As they work together to unravel the mystery of the new werewolf “potential”, they each begin to find themselves and discover who they are together and apart.

I ran across this title while looking for books featuring strong female leads. I was tired of reading about boy crazy girls waiting around for dumb jocks who eventually ended up cheating on them and the girls subsequent crumble into dust. This story definitely offers up female characters that are anything but ordinary, though the romance between Silas and Rosie didn’t seem entirely necessary. Reading the book I often cringed at the characteristics of the two sisters, Scarlett’s obsession with hunting to the point of refusing to see her sister as her own person and Rosie’s simpering dependence upon Scarlett and Silas were equally obnoxious. Though one might argue that the whole point of the story was to demonstrate the girls’ ability to grow out of these less fortunate characteristics.

Jackson Pearce started writing when she was 12 years old and her school librarian couldn’t recommend her a book that contained a “smart girl, horses, baby animals and magic”, she resolved to write it herself. Pearce lives in Atlanta, Georgia and is the author of five books, three fairy tales retold like Sisters Red and two stand alone novels.

3.7 Recognize and understand the significance of various literary devices, including figurative language, imagery, allegory, and symbolism, and explain their appeal.

3.6 Analyze the way in which authors through the centuries have used archetypes drawn from myth and tradition in literature, film, political speeches, and religious writings.

How does the Little Red Riding Hood reboot differ from the original tale? What similarities are there?

What does family mean to these two sisters?

Does this change as the novel progresses?

This is a violent book and some of the characters are preternatural, which may lend to some complaints from conservative and religious patrons.

It is not the responsibility of the library to monitor the reading habits of its patrons. We trust that children and parents have worked out what is appropriate reading material for themselves. The ALA Library Bill of Rights clearly states that, “Books and other library resources should be provided for the interest, information, and enlightenment of all people of the community the library serves”. This popular novel allows readers afresh perspective on the classic Little Red Riding Hood tale, and features two strong female leads. Rather than telling the story of a little girl who waits for a man to save her, this story has the girl figuring out how to save herself and is an excellent example of modern day girl power.

Strong female leads, on the Bitch list of best 100 books for young feminists

This entry was posted in book and tagged fairy tales, reboot, strong female leads, YA FIC. Bookmark the permalink.