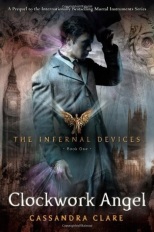 When Tessa Gray sets out across the Atlantic to join her brother in London she expects a grand adventure and a new life. What she ends up discovering is a world rife with demons, vampires and other creatures that go bump in the night. Under the protection and guidance of the Shadow Hunters, an underground organization dedicated to fighting the monsters, Tess must work against the clock to save her brother and protect all she knows and loves.

Tessa Gray is all alone in the world: the aunt who raised her has died and her brother is overseas trying to make his fortune. When he sends for her she is overjoyed at the thought of being reunited with him. Only she is kidnapped by the evil Dark Sisters and forced to do acts of magic that she barely understands.

After a daring rescue by the mysterious Shadow Hunters, Tessa takes up residence at their London Institute: headquarters and training grounds for the group. Tessa agrees to use her power to help the Shadow Hunters in exchange for their help finding her brother. That is if she can avoid the distraction of the two devilishly handsome Shadow Hunters Will and James, who both have an undeniable allure and their own secrets.

She soon finds that she may have to choose between the task she set out to complete and the promises she’s made. Unsure of who to trust and which are the right decisions Tessa must look within herself for the answers the strength to move on.

Some of this novel is a little ridiculous. The teen boys, James and Will, take themselves a little too seriously and buy into their own hype a little too much for my taste. Will knows how dashingly handsome and mysterious he is and totally plays into it. It’s obnoxious. The efforts that James goes to to hide his illness is ridiculous, in not wanting to make a big deal about it or have people pass judgement on him because of it, he manages to come off and a whiny idiot and indeed does exactly what he’s trying to avoid. Overall though? It’s a fun novel if you can look past the self involved characters (and really, what teenager isn’t self involved) and just enjoy the novel for what it is: a mechanized novel that takes place in Victorian England (am I the only one who thinks that the inclusion of cogs = steam punk is hilarious?).

Cassandra Clare was born overseas, in Tehran, Iran. She spent her formative years travelling the world with her family, living in locations all over Europe before her tenth birthday. She published her first work in 2004, a short story called The Girl’s Guide to Defeating the Dark Lord  which is included in a Baen anthology of humor fantasy. City of Bones was her first novel, and exists in the same world, though present day, of the Clockwork Angles world. She’s published 18 books, five of which are co-authored with Holly Black. Most recently she published the sequel to Clockwork Angels, titled Clockwork Prince and Yen Press is due to release a manga version of Infernal Devices this winter.

In Tessa’s position would you have gone with the Dark Sisters?

There is violence and some smooching in this novel and some patrons may feel uncomfortable with that. As ever the library urges that readers and their parents choose for themselves what is appropriate for them to read. Should you wish to challenge a book forms for reconsideration are available, though the library reserves the right to make a final decision after review by the board. Alternate titles to consider in lieu of this novel are Once a Witch by Carolyn MacCullough and Hush, Hush by Becca Fitzpatrick.

A fun read that will appeal to those who enjoy steampunk culture.

This entry was posted in book and tagged steam punk, YA FIC. Bookmark the permalink.