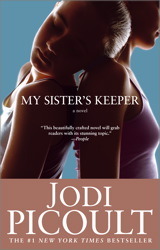 Anna is suing her parents for medical emancipation. A so-called designer baby, her embryo was specifically selected because it was a genetic match to her sister, Kate, who was diagnosed with acute promyelocytic leukemia at age three. What happens when one sister refuses to be a donor for another? Will Kate survive long enough to find out?

Anna Fitzgerald is not sick, but she has been hospitalized repeatedly from a young age. Her older sister, Kate, has a rare and aggressive form of leukemia and Anna is a perfect genetic match, a personal blood and marrow farm for her terminally ill sister. When Anna is 13 and Kate needs one more donation, a kidney, Ana puts her foot down. She hires the ornery attorney  Campbell Alexander to represent her case for medical emancipation, much to the shock of both her parents when they are served with papers in Kate’s hospital room.

As the family struggles to survive the book reads from the perspective of all the major characters: their mother, Sara Fitzgerald, tells the story of Kate’s cancer from diagnosis to present day. Jesse Fitzgerald is the eldest child of Sara and Brian, and his story is that of the forgotten son, misfit and trouble maker he struggles to find his place in the family that gave up on him in favor of Kate so long ago no one can really remember how it happened. Brian Fitzgerald is father to the three children and husband to Sara, his narrative takes place in the present day as he struggles to protect his children and keep his marriage whole. Julia Romano is the beautiful court appointed guardian ad litem and spurned high school lover of Campbell Alexander, the attorney with the mysterious service dog who keeps everyone at arms length.

My Sister’s Keeper is a beautiful coming of age story about a family discovering what it means to act autonomously in the face of death and betrayal.

Normally Jodi Picoult isn’t the kind of author that I’m drawn to. I know that her books are high circulating and that she’s a best seller and that everyone loves her, but I generally don’t have any patience for this kind of story, what with its love and feelings (that was supposed to be funny). I read My Sister’s Keeper specifically to include it in this project and was pleasantly surprised by the contents. This is not a shallow-feel-good-family story. Picoult gives each character depth and personality, and as readers we become intimate with struggles and pains of all the players.

Jesse was one of my favorite characters. In the story Jesse and both of his parents say repeatedly that he’s the one everyone has given up on. This blew my mind. Is this a real thing? Your one kid gets cancer and you let the other one live above the garage and brew moonshine? The thing is that Jesse tries so hard to be nonchalant about his parents disappointment, or I guess non-responsiveness, but he desperately wants to be a member of the family that matters: he asks Kate’s doctor, with tears in his eyes, if he could be a donor for her when her death seems all but imminent; he sets these outrageous fires which his dad, capitan of the fire department, has to come to put out. If anyone could ever wave a flag that said “here I am, notice me!” this kid is doing it.

Jodi Picoult was born and raised in Long Island, New York. She began writing a very young age, 5, and her first story was called The Lobster Which Misunderstood. She went on to study creative writing at Princeton and is the author of eighteen best-selling novels. Some her first work was published by 17 Magazine while she was still a student. Before becoming a full time novelist she held several other positions in writing and education: technical writer for a brokerage firm, copywriter at an ad agency, editor at a textbook publisher, and teaching 8th grade English. Eventually she returned to school and obtained a Master’s in Education.

She’s won a ton of awards for her work, an Alex Award from the Young Adult Library Services Association and a New England Bookseller Award for Fiction, just to name a couple. In addition to her 18 novels she also penned 5 issues of Wonder Woman for DC Comics and he work has been published in 35 countries, and several novels were produced as television movies, and of course My Sister’s Keeper her first big screen movie. In short, Picoult is a well loved American author who’s work appeals to all kinds of readers.

Do think Brian and Sara have a happy marriage?

What is Jesse trying to accomplish with his fires?

This novel is pretty clean, though it is obviously about cancer and death, it’s hard to imagine what a parent/patron would object to. As with all the items in this collection a strong collection development policy, along side our clear support of every reader’s right to read and protection from censorship, backed by the ALAs Library Bill of Rights, should offer some protection. We trust that parents and their children have agreed amongst themselves what is appropriate reading material.

This is a touching coming of age novel written for adults that will appeal to YA readers, included as a crossover novel.

One response to “My Sister’s Keeper”