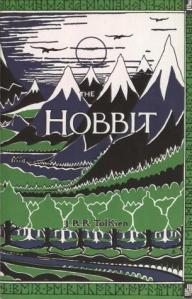 Enter the magical world of Middle Earth where little people, Hobbits, are just as common was dwarves, elves, shape shifters and giant spiders in the deep dark woods. This story is sure to capture your imagination as you join Bilbo and the 13 dwarves of Thorin Oakenshield’s company to rescue a long lost treasure from the clutches of the evil and foul wyrm Smaug.

Bilbo Baggins enjoys a quite life in his home under the hill at Bag End in Hobbiton, he enjoys long walks, second breakfast, and tending to his poetry and garden. In short, he leads an ideal life for a Hobbit, full of good food and completely lacking in anything out of the ordinary. Until one day when Bilbo runs across a troublesome wizard, Gandalf, who introduces him to a group of even more troublesome fellows: thirteen dwarves bent on retrieving a pile of treasure buried in a mountain hundreds of miles away. What’s worse is that the treasure has been commandeered by a dragon and Gandalf has convinced the dwarves that Bilbo is just the fellow to get it back. In a very un-Hobbit like manner, Bilbo joins this company of dwarves on an adventure that changes his life forever.

I’ve read this book more times than I can count and it never stops being excellent. The world that Tolkien created in The Hobbit, is a world that I would gladly live out my days in. From the rolling hills of the Shire, with its verdant farm lands and fields that produce the most excellent hops, as evident in the Hobbit’s fondness for beer. To the endless trails where countless adventures away. Elves are no more than a few days walk away with the stoicism and riddled way of speaking, languishing the days (or years) away in the company of Elrond in his beautiful home in the valley of Rivendell sounds like a fine pass time. If you prefer a bit of danger wander into the Misty Mountains or try adn treat with the sneaky elves in Mirkwood, just watch out for trolls and giant spiders.Yes, for me after all these years it’s really the world that Tolkien has created more than anything else.

John Ronald Reuel Tolkien was born in 1892 in South Africa, and moved to England at age 2 after his father died. His mother passed on when he was 12, leaving Tolkien and his brother orphans. The boys lived with their aunt, Beatrice Suffield, and later with another unrelated woman, Mrs Faulkner, and were provided for by their family priest Father Francis Morgan, until Tolkien entered Exeter College at Oxford in 1911.By the time he entered Oxford he had already mastered Greek and Latin, and went onto to study the Classics, Old English, Gothic and other Germanic Languages, as well as Welsh and Finnish. Around 1913 Tolkien dropped his study of the Classics turned his focus onto English Literature and Language.

In 1925 Tolkien returned to the college as a professor and there he befriended C.S. Lewis, who shared Tolkien’s love of myths, language and folklore. Lewis and Tolkien founded the Inklings in the 1930s where they gathered with several friends to share and critique their work. Tolkien is best known for The Hobbit and Lord of the Rings, and the prequel to them both The Silmarillion. He also authored The Adventures of Tom Bombadil and Other Verses from the Red Book; Smith of Wootton Major; Unfinished Tales of Numenor and Middle-earth; The Book of Lost Tales, Part I and Part II, as well as several translations of ancient myths.

The Hobbit has portions with violence and magic. This may offend some readers. As always the library urges readers to choose material that is right for them. We are supporters of the ALA Library Bill of Rights and thus do not support censorship of material. The library will reconsider items and reserves the right to make the finals decision after review by the board.

I included The Hobbit in this project because it is the book that made me the nerd I am today. I read it for the first time in the 6th grade, and hundreds of times since, and never looked back. It should be required reading for any fan of fantasy fiction ought to be in every young adult library.

This entry was posted in book and tagged crossover fic, fantasy. Bookmark the permalink.

One response to “The Hobbit”