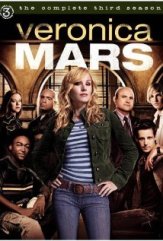 High school sleuth, Veronica Mars, assists her private detective father (recently demoted town sheriff), solving mysteries for the community of their small town, but she’s also got a few mysteries of her own to solve. How did her best friend die? And why has her mother disappeared too?

Veronica Mars is a classic high school teen; she’s got a hot boyfriend, is on the cheerleading squad and has the love of two amazing parents. That is until her world turns upside down and her best friend, Lily, is murdered, her sheriff father is fired from his job for incompetence, and her mother disappears in the aftermath. Someone is out to get the Mars’ and Veronica is determined to find out. With the reluctant help from her private detective father, as well as her closest friends: Wallace the basketball star, Mac the computer genius, and her unlikely comrade local motorcycle gang leader Weevil Navarro, Veronica delves deep into the history and private business of some of the most elite town members, stepping on as many toes as she can along the way. As the first season progresses Veronica uncovers evidence that may prove the man convicted of her friend’s murder innocent and finds herself getting more and more involved with the boy who held her responsible for Lily’s death.

Veronica Mars is a spunky, witty character. At first glance she seems like a stereotypical privileged teen: she’s a blond, popular, cheerleader, with a hunky boyfriend from a wealthy family. In the aftermath of her best friends death and her father’s disgrace she becomes a school pariah and finds herself learning to live among the regular kids. Veronica doesn’t allow these setbacks to derail her two obsessions: solving Lily’s murder and finding her mother. One of the things that makes Veronica a great character is that she continuously stays true to herself. Unlike other representations of teenage girls in media and literature Veronica seldom, if ever, compromises her ideals for the sake of her love interest, or loses sight of her goals, because of a boy. In further defiance of stereotypes, Veronica’s best friend is male, and there is absolutely no romance between the two of them. Veronica Mars is a great character for young women, and one I’d like to see more of in popular culture.

Rob Thomas is a producer, screen writer and author. He was raised largely in Texas, and graduated from University of Texas at Austin with a BA in history. He is probably best known for his 1996 novel, Rats Saw God. Thomas also co-created Party Down, another television show known for its witty dialogue.

This television show discusses all kinds of sensitive topics that are bound to offend someone. Teenage sexuality, infidelity, gangs, underage drinking, mental illness, murder, adoption, absent parents and much much more! The library collection development policy clearly states that we follow the guidelines as laid out by the ALA Library Bill of Rights and do not suport censorship, nor are we responsible for monitoring the borrowing practices of our users, we do this to protect everyone’s privacy.