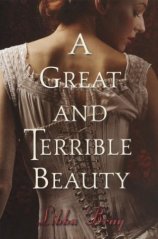 This book is one in a series, the collection contains all three in the series.

Gemma Doyle is sent to finishing school after tragedy strikes her family. She soon finds out that she is anything but a typical English girl, as she and her friends gain access to the beautiful Realms where all of their dreams are made real. Everything comes with a price though, and Gemma soon learns her powers come with a responsibility she doesn’t know if she is ready for.

Gemma Doyle has been begging her mother to be sent home to England for ages. Only now that it’s happened Gemma would prefer to have her mother still alive, to be safe and happy in India, rather than shipped off the the dreary finishing school outside London. Her roommate has a drippy nose, the popular girls are catty and rude, and she can’t stop worrying about her father and his alarming descent in to laudanum abuse. Possibly worst of all is the cryptic, yet handsome Kartik, who has followed her, from India, to warn against using a magical power she isn’t even sure she really possesses.

As Gemma starts to settle in at school and find a place in popular Felicity’s inner circle, magical things begin to happen. Gemma finds an old diary that tells of the Order, an group of powerful women magicians that protected the magical Realms. The diary also explains how to enter The Realms, where the girls find they can make all of their dreams come true. Gemma and the girls never want to leave The Realms and all of the magic contained within, but they cannot stay and taking the magic with them is not allowed. Despite Kartik’s urgent warnings Gemma and her friends keep going back to the Realms, what they have there is too good sacrifice.

Gemma soon learns that with her power comes a great responsibility as she is forced to accept the consequences for her actions and sets out to rebuild the Order.

I loved The Gemma Doyle Trilogy. The story line is super compelling, a perfect combination of frightening, romance and magic. It’s true that some of the characters are really obnoxious, I could barely stand Pippa and Felicity, but Libba Bray writes such good story that I was able to overlook them. And while there is a bit of mooning and swooning over men, the girls are largely true to themselves and one another. Indeed, when Pippa chooses her “prince charming” she’s forced to live in the Realms and her body on this plane dies, she can’t come back. If that’s not a warning against shacking up too young, I don’t know what is! Gemma’s character development is one of the best aspects of the series. She goes from being a whiny brat who only cares for own immediate needs, indeed she won’t even listen to warnings of her dead mother, to a young woman who has learned exactly to what extents she will go for friendship, honor and love.

Libba Bray was born in Montgomery, Alabama in 1964. After she graduated from high school she got into a serious car accident, crushing her face and losing her left eye. It was during this time that she learned that you can write yourself out of what seems unwinnable and into something wonderful. After she finished college she moved to New York and started writing with no more than $600 to her name. She wrote 5 plays, 3 of which were produced and 1 that won an award. She’s in a YA-authored band, called Tiger Beat, with Natalie Standiford, Barnabas Miller, and Daniel Ehrenhaft. She’s written 6 books, most recently The Diviners, which came out earlier this year.

Gemma’s mother repeatedly warns her against taking the magic outside the Realms. Why does Gemma decide to discard her mother’s warnings and do just that?

This novel contains magic and other worlds. The library would remind its users that it fully supports the ALA Library Bill of Rights and defends the right to read for all of its users. We trust that parents and their children have established for themselves what is an appropriate level of literature and do not keep records of what any of our users read. If the topics discussed within this text make the user uncomfortable we suggest that the user examine alternate titles like, Ophelia by Lisa M. Klein or A Countess Below Stairs by Eva Ibbotson

One of my favorite books!

This entry was posted in audiobook and tagged audio books, books, series, YA FIC. Bookmark the permalink.